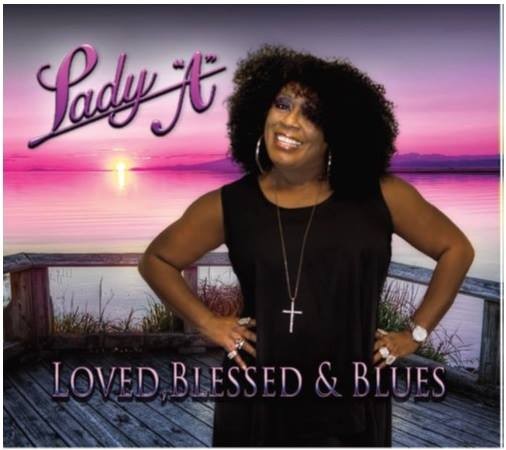 “How Did I Get Here?”  Nominated by Washington Blues Society for Best Self-Produced CD for 2013

"BlueZ in the Key of Me" Nominated for 2010 Blues Music Award (BMA) by the  Blues Foundation, Memphis, TN

and Lady A's New Release - LOVED, BLESSED & BLUES  is fast becoming a Blues Woman's anthem with cuts like "Honey Hush", "If You Don't Want It, Don't Waste It", "Happy" & "Don't Let Your Blues, Become a Crime"

The Lady's high energy show has been compared to the likes of "Tina Turner" and "Chaka Khan" ~  that smile easily draws the audience in with her sultry-husky voice and contemporary blues styling.   Like a Good pot-a-Gumbo, Lady "A's" show is always spicy and she highly believes in Audience participation!   Known as "The Hardest Workin" Woman"  in Blues, Soul, & Funk" - she also host DJ's Lady "A's" Gumbo & Gospel show on NWCZ online radio in Tacoma, WA every Sunday 3pm - 5pm PST and on Blues 411 Internet Radio out of S. Carolina every Sunday from Noon - 2pm EST.    A woman who loves the Blues and the people it encompasses along her musical journey.  She also mentors the intellectually disabled by working with European groups, United by Music and Music Unites Europe by teaching and guiding young people and adults in Music of all genre's and keeps her roots grounded by working with Nuture Foundation who works tirelessly to feed the homeless.

When you listen or watch a show, you become engrossed in the journey through music and party like a Rock Star in her lyrics.