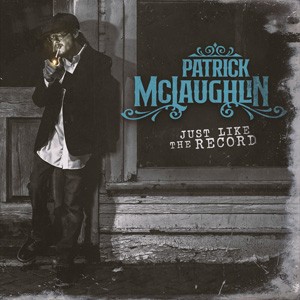 “When I start writing a song, it always sounds like a Hank Williams song in my head. When I’m done with it, though, it’s something completely different,” says indie singer-songwriter Patrick McLaughlin with a good-natured laugh. True to the carefree whims of his creative process, Patrick’s eclectic sophomore solo album, Just Like The Record (Bolt Records), is a soulful, genre-busting collection of fine indie-Americana songcraft.

The album title speaks to the guitarist/producer/composer/singer’s playful stage banter quip after he drastically reimagines a classic song onstage. He’s a masterful contemporary blues guitarist with a widescreen musical perspective that reaches well beyond preconceived boundaries. His artistry draws from rock, jazz, soul, indie-rock, and R&B. Patrick is also a thoughtful songwriter, serve-the-song musician, powerful vocalist, and an accomplished producer. All these facets—plus years of live performance, sharpening his chops—come together on the Columbus Ohio-based artist’s stunning new album, Just Like The Record.

“I make it a rule for my latest record to never sound like my previous one. This album was built to sound different. None of the songs sound the same, and I love the idea that each song is a stylistic surprise,” he says.

Just Like The Record is a culmination, so far, of a creative journey. It captures the many facets of Patrick’s artistry at a high level. Each song builds excitement by using various stylistic textures allowing the listener to take part in a new encounter. The songs feature fresh collaborations and instrumentation, and some of Patrick’s finest songwriting. “With this record, I feel like I got some unfinished business done, and I’m already starting the next new record.”