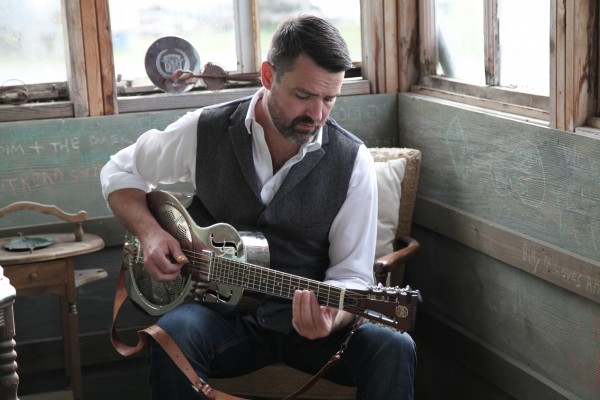 Martin Harley, originally from Cardiff, Wales, is a supremely talented roots & blues guitarist and singer-songwriter with a burgeoning global reputation. Harley has released five albums and toured internationally in the usual and some unusual places resulting in a notable Guinness World Record for playing the highest gig in the world (at 18.500ft on Kalapatter in the Everest region). He has also motorcycled through Mali, Guinea and Senegal where he performed alongside Vieux Farka Toure. October 2, 2015 marks the release of Live at Southern Ground, his eagerly anticipated new album, recorded in Nashville in collaboration with Daniel Kimbro (Jerry Douglas, Larkin Poe) on upright bass.

As Martin explains “I wanted to make something representative of where I am musically at the moment with an album that reflects on the last year solo and duo touring. Daniel and I met in Knoxville through a mutual friend… he handed me his card which read... 'alright guitar player… good upright bass player’ … an understatement on both parts!”

A mixture of retrospective solo and duo arrangements recorded during an afternoon at the esteemed Southern Ground studio in Nashville, Live at Southern Ground features Martin on Weissenborn, (a traditional Hawaiian acoustic guitar played across the lap), resonators and archtop guitars. Transcending the stereotypes of Blues music, Harley uses these idiosyncratic instruments, along with Kimbro's bass (at times bowed), to create entrancing and soulful compositions. His impassioned voice tears through this album; from the testimony on "Nobody's Fault But Mine" to the love-lorn, fast paced, country-blues "Honey Bee"  and a slow, mournful take on "Goodnight Irene", a traditional song made famous Lead Belly.

“It's a simple, honest and direct album with no overdubs in a warm sounding room with fantastic microphones and two new friends playing a few songs over a cold beer or two” says Martin. “It's a great feeling when you click with someone. It frees you up to experiment with the arrangement and the dynamic of a song.”

Past US shows include headlining Nashville's Music City Roots, performances at Bottle Rock, Robert Mondavi, the Bing Lounge and Live in the Vineyard. He has toured coast to coast with ZZ Ward, Delta Rae and opened for Iron and Wine, Bruce Hornsby, Five for Fighting, World Party, Beth Hart, Joe Bonamassa and many others. TV placements include Vampire Diaries and Banshee. VH1 morning buzz, Fox and numerous regional shows have  broadcast interviews and live performances.

In 2015, Martin will be touring in North America, Germany and the UK. Expect solo and duo tours of Canada, US, EU and the UK throughout 2016.