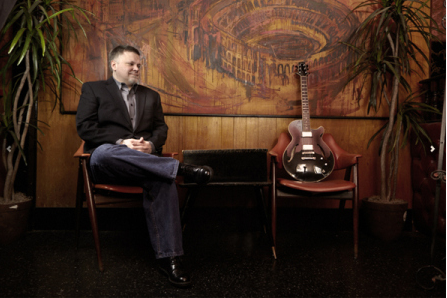 Rik Wright is a true musical chameleon: adapting to a range of colors and musical attitudes, all rooted in the same body of influences. Of those influences, the fortunate listener will discern a jazz foundation, a solid infrastructure of rock, and binding it all, a voice so original that it cannot be called either. As a guitarist Wright has incorporated a variety of styles—often subconsciously—ranging from Andy Summers of The Police to John Abercrombie. Compositionally speaking, he hangs with a different crowd, mingling with the spirits of Mingus, Monk, and Miles. Of this alliterative trio, the last has been a conscious inspiration in terms of process. In fact, as becomes obvious once you acclimate to its flow, Wright’s improvising strikes more of an affinity with horn players than guitarists. An intervallic, melodic player at heart, he prefers his wheat brewed, not shredded.

That said, over the course of his artistic development, Wright has cultivated a more heartfelt allegiance to rock’s penchant for category erosion. As one who grew up with Jeff Beck on one shoulder and Jim Hall on the other, Wright bears the mark of a generation that burned bridges between genres. When an injury stopped him from gigging altogether, he re-evaluated his craft and, for the first time in a decades-long career, began making music purely for its own sake. If he was ever to get back in the game, he knew it would have to be on his terms and his alone. He wrote fearlessly. The result of this paradigm shift was the assembly of Rik Wright’s Fundamental Forces, which in 2011 become the primary stage for its leader’s compositions. Thus, the seeds of their debut recording Blue, released two years later, were germinated.

Like the forces driving them, fundamental too are the tunes themselves. Blending forward-thinking arrangements with a core groove you can grab hold of, the band invites appreciation at every turn. A whole new crop of listeners became aware of this with the release of Red in 2014. The second album of an ambitious color-themed trilogy, it expanded the Fundamental Forces universe with an even deeper feel and texture. That the album hit #1 on the CMJ jazz charts was no small testament to the integrity of Wright’s vision, which has come to full fruition in 2015 with the release of Green. The trilogy now complete, one has the benefit of hindsight to put all the jigsaw pieces together to see the distinct shape of each, but also their seamless fit.

Such organic syntheses have earned Wright critical praise across the board, prompting AXS.com to proclaim, “Wright’s music is innovative, paving a path of his own making through the jazz kaleidoscope. Eclectic sounding with a flair for the exotic, Fundamental Forces is artistically imaginative and ventures into synthesizing a breed of blues, bebop, and rock that expands the public’s perception of jazz.” And in the end, perception is what it’s all about.