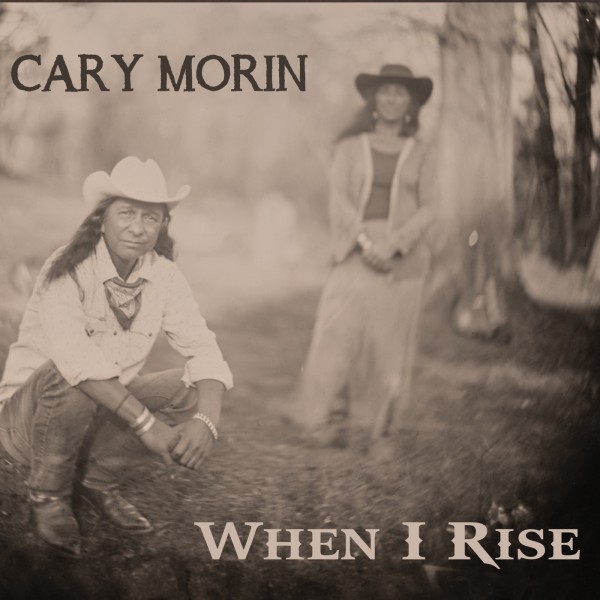 Award-winning blues/roots singer-songwriter Cary Morin released his new album, When I Rise, October 26th, 2018 from Maple Street Music. Morin’s sixth release, When I Rise, follows close on the heels of an international tour that spanned the U.S. and reached as far as Italy, France, and Germany. The even-dozen tracks on the new album include 10 originals, plus Morin’s take on the Jerry Garcia/Robert Hunter song, “Dire Wolf,” and a beautiful version of Duane Allman’s classic, “Little Martha.”

Morin’s last album, Cradle to the Grave, generated reams of high praise from the critics and substantial radio airplay. “‘Cary Morin is a unique and brilliant guitar player, songwriter and singer,’ says renowned folk musician David Bromberg, extolling the virtues of one of his favorite players. ‘It’s hard to pick out what he does best.  As a guitar player, I have huge respect for Cary’s style and technique on the guitar. If you haven’t heard him yet, you should. Try to remember that it’s only one guitar.’ - Dan Forte for Taylor Wood & Steel

Watch a promo video about When I Rise here: https://youtu.be/N-_op6sug-4

“I had the luxury of being home for longer than usual, to work on this project,” recalls Morin about the sessions. “I had plenty of time to write and record and refine. At the time, I was listening to and exploring a lot of music, much more so than when I am on the road. I was able to spend time crafting the songs and recording them in pre-production, sometimes multiple versions of the same song. It was great to have the time to experiment.”

Morin reflects on his upbringing and how it informs his music. “I grew up in Montana in the ‘70s. As a child, I would listen to whatever was on radio or vinyl that my folks or my brothers had. Somehow the very first song that I played and sang on piano when I was in the first grade was a Chubby Checker song. I also came across a Doug Kershaw album at the Base Exchange (Cary’s dad was an Air Force officer).That made me want to play the fiddle, which I was blessed to do as my folks found me a used one in the paper. I’m not sure how Louisiana music made it into my life as kid, but it did. As I continue to listen and play guitar on the couch, my music evolves. As the years go by, I am drawn to the music that I heard and loved when I was 10 years old growing up in Montana. The themes tend to stay the same. I write songs about fishing and life. As my wife Celeste and I traverse this country, my eyes are flooded with landscapes and visions that gift me with an endless supply of songs.”

The album’s title track is one of those songs that had its genesis in the music he heard growing up. “I was immersed in the Alan Lomax recordings of the ‘40s for a time, primarily prison songs from the south; listening to rhythms and melodies. I came up with the idea for ‘When I Rise’ based on that study. The imagery is a man who is present as another man's life is taken and is sure he will be to blame. He struggles with how to tell his family. Should he take the punishment or run. He ultimately runs and leaves his family behind.  Playing around with a d-minor tuning felt right for this song. Kim Stone had an idea of how to perform it, so it became live in the studio, standing in a circle performing around a microphone acoustically.”

“Jug In The Water,” a song that appears in both electric and acoustic versions, also has an interesting derivation, per Morin. “This comes from listening to older blues, work songs, prison songs and Doug Kershaw’s ‘Louisiana Man.’ It’s about the struggle to get everyone fed when there isn’t a whole lot of work available, combined with other social struggles. I keep writing songs about fishing! The gator summons the image of a swamp in the south. ‘Standing around the court house’ speaks to the struggles that this character has to deal with. He has the feeling that whether he’s guilty or not, the outcome won’t favor him. I love a one chord swampy blues groove, it creates a mood all on its own and gives me a rhythm for fingerstyle ideas.”

And on “Let Me Hear The Music,” we learn the breadth of Cary Morin‘s influences and musical upbringing. “Many times when questioned about where my music comes from, I think of my musician friends and memories of old songs. As a child, the first time I heard a song ‘on TV shows like ‘Hee Haw,’ ‘Don Kershner’s Rock Concert,’ or ‘Soul Train,’ that version of that song is the only version I can hear forever. I used to listen to classical guitarists like Andres Segovia, Vicente Gomez and Gypsy music, piano rags, etc., when I was about 12 years old. When I saw Leon Redbone on SNL back then, I was enthralled that he played as a solo artist. I had the words for this song that speak to artists digging other artist’s work. It’s about the need for beauty in our lives and those that provide that for us whatever the medium. I had the words but didn’t want to commit to a melody until I was certain of how it would lay. Finally after a week or so, I told Celeste my quandary and she said ‘listen to Billie Holliday.’ That led to Rosemary Clooney and others. Her suggestion set the mood and melody for this song.”

Described as “one of the best acoustic pickers on the scene today,” Cary Morin brings together the great musical traditions of America and beyond like no other artist. With deft fingerstyle guitar and vocals that alternately convey melodic elation and gritty world-weariness, Morin crafts an inimitable style often characterized as acoustic Native Americana with qualities of blues, bluegrass, jazz, jam, reggae, and dance.

About Cary Morin
A Crow tribal member who was born in Billings, Montana Morin spent the bulk of his youth in Great Falls, where he cut his teeth picking guitar standards at neighborhood get-togethers, before relocating to Northern Colorado. There, his musical career hit the ground running with The Atoll, a band he founded in 1989 that toured nationally, gaining a devoted following. Later, he achieved international acclaim with The Pura Fé Trio, for whom the single “Ole Midlife Crisis,” which Morin wrote and performed with Pura Fé, placed at number 17 on France’s iTunes blues chart. With The Atoll and The Pura Fé Trio, and as a solo artist, Morin has played celebrated venues across the globe, including Paris Jazz Festival, Winter Park Jazz Festival, Folk Alliance International, River People Festival, Shakori Hill Festival, the 2010 Vancouver Olympics, and most recently Rochefort En Accords festival in France and The Copenhagen Blues Festival.

Morin’s stage credits also include Tribe at the Celebrity Theater in Phoenix, and co-authorship of Turtle Island, a 50-member production that played two consecutive years to sold-out audiences in Northern Colorado. With the Red Willow Dancers, he was a guest of the internationally renowned Kodo Drummers, performing at their 1998 Spring Festival and additional dates in Japan. He has produced or performed on over 18 recordings, and has toured across the US, as well as Japan, France, Germany, Italy, Switzerland, Spain, Belgium, Denmark and the UK. Morin’s performances have reached millions on national TV in Japan, France, and the UK, as well as on national radio in the US (NPR’s Beale Street Caravan), UK (BBC’s Whose London), France (RFI), Switzerland, and Belgium.