When their 2015 debut album Turmio hit the streets, Okra Playground was hailed as “one of the most exciting bands to come out of Finland in recent times." Formed in 2010, the six experienced musicians received high acclaim for their captivating musical energy informed by deep knowledge of and passion for their folk heritage.  The sextet followed that up with touring and a showcase appearance at WOMEX. In 2018, their second album Ääneni Yli Vesien was also deliriously fun, with everything sounding old, new, esoteric and relevant at once. As they continue to build their legion of world-wide fans, Okra Playground engages listeners with colorings of kantele (zither), jouhikko (bowed lyre), accordion, electronics, guitars, bass and percussion in a way that naturally complements lyrics, rhythms and folkloric traditions.

As their highly arranged musical tapestry weaves magical textures, the dynamics of Okra Playground’s music challenges us to “Look yourself in the eye in the mirror, grab hold of this feeling. Let the tears flow freely from your eyes. There’s no need to keep your mouth shut anymore. Let your song be heard all the way to the ends of the earth. Shout …” as Helsinki-based musician Päivi Hirvonen wrote in “Laula! (Sing!)”

A 2011 Master of Music graduate from Sibelius Academy, Hirvonen is currently pursuing a doctoral degree with her research in solo performance and storytelling. She wrote the music and lyrics for several other tracks, and this album also showcases the songwriting abilities of bandmates Veikko Muikku, Maija Kauhanen, Essi Muikku in tracks like “Kylmä lintu Kyyneleeni (Cold Bird, Take My Tears)” and “Kymmenniekka Kylässä (The Tithe Collector).”

Okra Playground captures true daring Värttinä spirit, but their beguiling music and outstanding arrangements also have contemporary meaning and messages. With themes of change, growth and adversities, Okra Playground’s shows offer a breathtaking and powerful picture of the world, where light and shadow interchange. Amid catchy rhythms, fun-filled harmonies, and multi-layered instrumentation, this ensemble has a handle on that provocative Finnish vocal/instrumental concept that will continue to gain them international recognition. (Joe Ross, Roots Music Report) 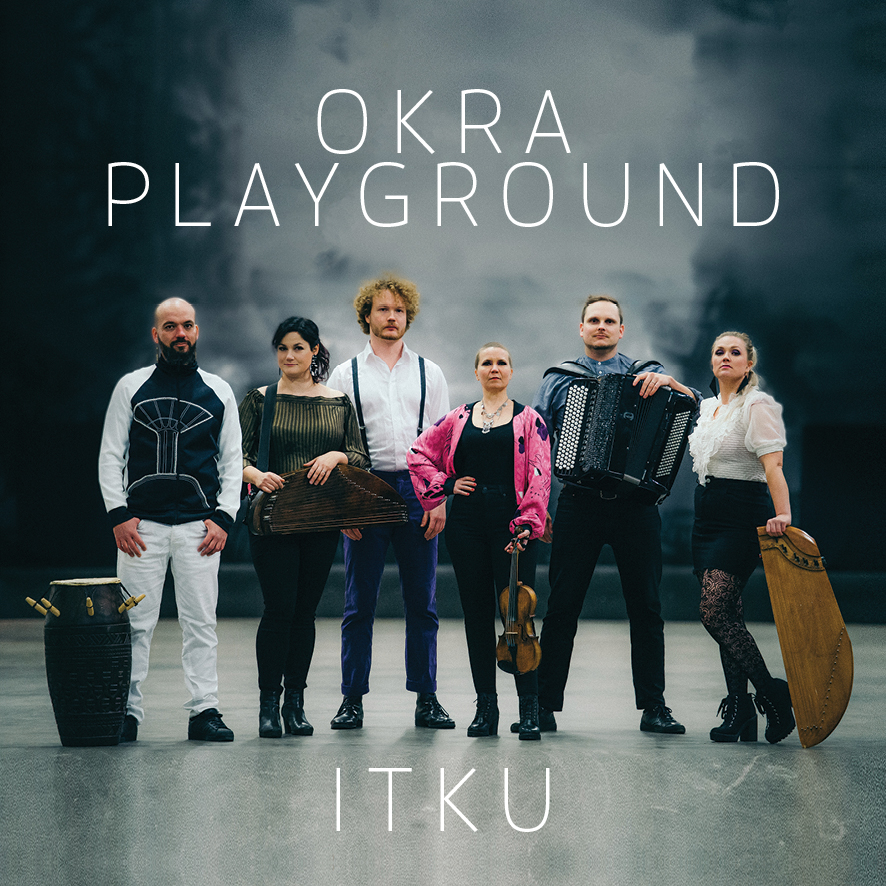